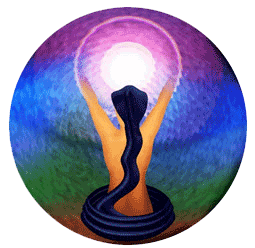 At New Year I choose a word that I want to represent that year. For 2013 I chose “Power”. I recognize that it is a loaded word and I’m clear about my intention in calling it forth. The type of power I am referring to is internal primal power.

Let me define my terms:
Internal – Emerging from Within
Primal– Essential, Fundamental, Primary
Power– The ability or capacity to act effectively
Thus, internal primal power is the force that drives and guides me in life and the source of it is fundamentally from within.

There also lives in us an inner dictator that seeks to wield power, to over-power rather than empower to attain its goals. This kind of power, dominant in our culture, is referred to as patriarchal power. Our inner dictator, informed by patriarchal power, responds out of fear, real or imagined, and the desire for total domination.

Recently, in doing some reading to prepare for a Craniosacral course, I came upon this quote that speaks eloquently about the inner dictator and the danger of it:

“It’s the therapists job to find the client’s soul and love it! That’s all I am really interested in to tell you the truth…

…The body can be a dictator. It has learned its lessons of power. If you have been treated, and abused, with power- over-powered, you will abuse yourself with power. Most of us were brought up on power, that is the patriarchal society, the patriarchal mode. We unconsciously use it. Bodyworkers sometimes think they know what the body should do. They don’t! -anymore than the analyst knows what the psyche should do. Bodywork that is an exercise in power is entirely wrong, another violation of the body. The needed bodywork is the bodywork where the soul is listened to, respected and given an outlet. The soul loves to move, to express, to be free, and hates domination and desertion. Bodyworkers must surrender any power ideas, must surrender, because the soul has taken all the power it can take. It will not tolerate anymore.

Listen to the soul. Love it. Give it back its dance. Then give the soul a format for understanding, for integration and for anchoring.”

~Marion Woodman-Jungian Analyst in The Heart of Listening ~Hugh Milne

This passage resonates deeply with me and how I approach my work. The experience of being abused by power leads to a power struggle within ourselves. The inner dictator is real and can be relentless–though I believe the psyche, not the body, is the source. The inner dictator’s tyrannical domination of the psyche is superimposed upon the body. It is not the presence of it, but the utter domination, that leads to violation of the body and the soul’s dance.

Internal primal power is our highest source of personal power and does not seek to manipulate and control others, rather to guide and protect us. Unchecked patriarchal power that informs our inner dictator seeks to destroy the internal primal power. Cues from within are squashed and belittled, sometimes even taken by physical force in order to reinforce the cultural norm because, when internal primal power is intact, we are less prone to be easily manipulated and controlled out of fear. Rather we are informed, guided and protected by heightened awareness and sharpened intuitive skills.

We must right the balance of power in the psyche. This may require the careful reclamation of internal primal power. Bodywork can be an extremely effective reclamation tool if, and only if, the “soul is listened to, respected and given an outlet“. Often buried under years of abusive messaging and cultural control a voice begins to emerge-a voice of power- as the body and soul become realigned with each other. Power is part of the souls dance; the reclamation of the balance of power away from the hands of the inner dictator is essential to that dance. 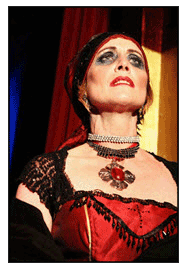 Shelly in a performance where she lost then regained her power.

For many years I have been exploring and confronting ways in which inner dictator power has been used from the outside, and from within, to dominate my psyche and wield control over my internal primal power. As I began to uproot this influence, I found my internal primal power in a sad state of cowering and angry disrepair. It had been stomped on, beaten into submission and thrown in a deep pit where it was starved and neglected. At first emergence, it terrified me! It appeared mean and vicious, inconsolable with a voracious appetite. With expert help, I began to confront it, feed it and slowly and very carefully I nurtured it.

It took many years but eventually it felt safe enough to emerge from the pit of my psyche and settle in a place I call the “shack in the back”. I was still wary of this internal primal power; I was concerned that it would over-power me and that felt dangerous and socially unacceptable. So I kept it tucked away, fed and nurtured it, perhaps hoping to tame it. I could more readily draw on this power than I could when it was in the pit but I still kept it at bay.

Then, just a few weeks before the New Year, during a particularly powerful Craniosacral session, my internal primal power came front and center. She moved in to the Main House, no longer content with the shack in the back. At first, I wasn’t sure how I felt about this; she felt wild and dark. I was frightened that if she was not kept under guard I would be over-powered by this force of nature as I had by the presence of the inner dictator.

What I have found so far is just the opposite. The fact that this energy is not abused, neglected, leashed and contained has meant that it doesn’t need to growl, scream or claw at my psyche to be heard. Its role is not to overpower but to empower me. It does not seek power over others or my psyche. It has taken a seat at the banquet of my life along with tyrannical Shelly and the multitude of other presences in my psyche. And you know what? They all seem to be getting along! It’s early days and some integration will be required but I think there is room for all of me in the Main House.

One day you finally knew
what you had to do, and began,
though the voices around you
kept shouting
their bad advice —
though the whole house
began to tremble
and you felt the old tug
at your ankles.
“Mend my life!”
each voice cried.
But you didn’t stop.
You knew what you had to do,
though the wind pried
with its stiff fingers
at the very foundations,
though their melancholy
was terrible.
It was already late
enough, and a wild night,
and the road full of fallen
branches and stones.
But little by little,
as you left their voices behind,
the stars began to burn
through the sheets of clouds,
and there was a new voice
which you slowly
recognized as your own,
that kept you company
as you strode deeper and deeper
into the world,
determined to do
the only thing you could do —
determined to save
the only life you could save.
~ Mary Oliver ~
(Dream Work) 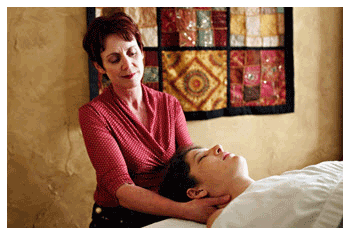 
Appointments* are available on Tuesday’s from 12-1pm
and offered at the deeply discounted rate of $75 for the hour (regular $95per hour).

Shelly recently attended a Craniosacral course with Faith Christensen ND, RN and is excited to be integrating this valuable therapy into her already extensive skill set.

For a limited time, Shelly is opening a time slot dedicated to the practice Craniosacral Therapy. We invite you to assist Shelly in sharpening her skills while receiving a deeply relaxing, therapeutic treatment at a great price!

* The above dates and pricing are only relavent to posting date of 1/31/13 and are subject to change.